Water Resources Management and Rural Technology Group has mandate to carry out studies in water resources management. Main capabilities of the Centre exist in Resource Modelling and Analysis.  Aim of the group is to apply Scientific and Industrial R & D that maximizes the economic, environmental and societal benefits for the people of the country through Watershed and Wasteland development, Rainwater Harvesting, Water Resources Management, Improvement of Irrigation, Rural Employment, Economic growth of Tribal Community.  The activities of Group are given in the following figure :

In the study two study sites were selected for instrumentation. One of the selected site pertains shallow ground water levels and other site fall within deep groundwater zone. Both the selected sites are coming under Tawa river catchment area of Hoshangabad district M.P. In each site instruments were installed for regular monitoring of soil moisture and temperature. The installed instruments contain data loggers connected with sensors (soil moisture & temperature sensors). These sensors are deployed at different depths (5, 7 & 10 feet) and are sensing the data continuously. After data generation analysis were carried out and relationship between soil moisture/temperature within soil profile was established (Fig.5). Also at these test sites water level depth is monitored regularly in a nearby dug well. Furthermore pre & post monsoon water level depth (Fig.1&2) have been recorded in dug/ bore wells at various locations in the watershed to observe the seasonal fluctuation of groundwater level. 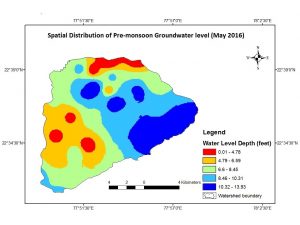 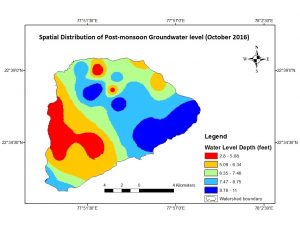 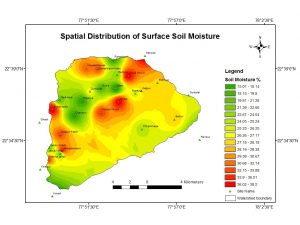 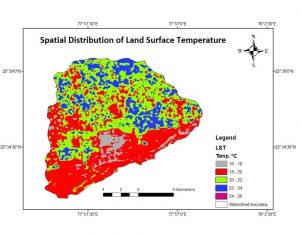 During the project work pre-monsoon and post-monsoon water sampling were done at various locations of the watershed and their analysis was carried out in the laboratory. The parameters of water which were analyzed include; pH, TDS, Ec, Phosphate, Iron, Manganese, Chlorine, Sulphide, Sulphate, Nitrate, and Fluoride. A bargraph of each parameter were made which is displaying the concentration of that parameter present in the groundwater. The results of water analysis have showed that at some locations iron is present above permissible limit (> 0.3 ppm). Manganese is found above permissible limit (> 0.1ppm) at many places of the watershed. Nitrate was also found at some locations above the permissible range. The other parameters analyzed were falling in normal range. Furthermore, information about the pesticides, fungicides and fertilizers applied there on crops and vegetables were collected. There effect on groundwater has been traced at many locations, which ensure that some chemicals and nutrients are leaching from the soil and get added in groundwater regularly.